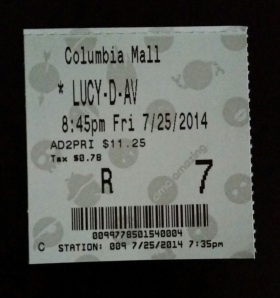 …you got some ‘splaining to do!

First and foremost, props to Scarlett Johansson for beating out Dwayne Johnson aka The Rock at the movies last weekend. Lucy‘s premiere scored a bigger box office take than Hercules. Impressive on many levels, the best of which is that a female action lead was a bigger draw. And I’ll admit that I saw Lucy and not Hercules (but I still love you, Dwayne!) because a friend in town chose between the two, but that’s okay because now I can enjoy The Rock in all his deliciousness all by myself.

But now for the actual review. I’m still not sure if I liked this movie (beware: spoilers ahead). What starts out in a seemingly random scene in an unidentified Asian city, quickly becomes a thriller and then an action movie, the slowly descends into sci-fi madness (in a good way). Overall, I think the plot was very intriguing and the concept even more so, the execution however, left something to be desired.

There was lots of head scratching at the end of the movie, pieces that didn’t quite line up. I had a lot of questions that could have been answered by simply taking the time to you know, explain what was happening. Johansson is supposedly a 25 year old student of some kind but it never specifies what she is studying or why she is in Taiwan, not to mention that (no offense) but she doesn’t look 25. She’s always played up as so mature in movies that to put her in a role below her actual age was a little disconcerting to me. Especially after seeing her badassery in The Avengers, I find it hard to picture any younger than that and she seems to be in her late-20s in that movie (like 27-28).

I felt like I was dropped into a world with very little explanation at the beginning of Lucy. There were little snippets of the guy she was with, Richard and how they met but nothing about how they ended up in front of a hotel…a flashback would have been nice, preferably in Richard’s head explaining his background/deal.

There were several scenes that made me go “what the actual eff just happened”. Like in the airplane bathroom. Was that all in her head? Did she actually explode and somehow get pieced back together with the drug? And what was the deal with the time travel at the end? Was that mentioned somewhere in Morgan Freeman’s speech and I just missed it?

And for once, this was an action movie without a serious love connection, which shocked me. Sure, there was that slight possibility with the French police officer, but nothing (not even a kiss!) happened. Which I honestly didn’t mind. I think that romance can often detract from action movies instead of add to the drama and intensity.

Not a bad movie, definitely different. I honestly love the concept behind it, expanding our mind and what we might be able to do with it if we could, but the movie didn’t thrill me. Kept me paying close attention but not sure I’d run out and buy it.